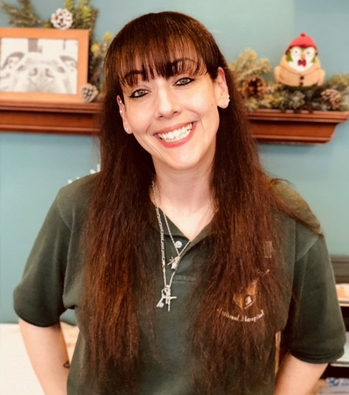 If you're a client of Kenwood, then chances are you've met our Client Services Manager Bonnie. A fixture here at Kenwood for the last 12 years, Bonnie exemplifies the "heart" of Kenwood- exuding sincere joy, friendship, and compassion for our patients as well as their human guardians.

When she's not hard at work here at Kenwood, Bonnie likes to spend time with her family, including two cats and a roly-poly pittie girl named Misty. She loves to read, go to the movies (especially scary ones- she and her daughter are big fans), and take walks. She also really loves sleep, and her husband's home cooking (we're all quite jealous of her daily gourmet lunches). Bonnie is very close to extended family in Pittsburgh (including being an avid Steelers Fan), but her immediate family is here in the Washington Metro area, where she grew up.

Fun fact: Bonnie has worked as a veterinary receptionist since the age of 14! Following in her mom's footsteps, her daughter Ashley has volunteered in various capacities here at Kenwood whenever she had time around her school schedule, and now works with us seasonally in our boarding kennel. (And we know, it's hard to believe Bonnie could have a teenaged daughter!)

One last tidbit about our Bonnie: Yes, she really is that cheerful ALL the time. 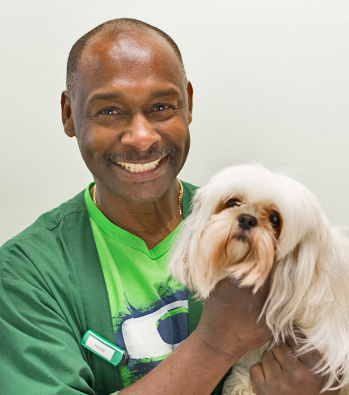 With 30 years of experience working with animals, Kenwood Animal Hospital's Boarding and Facilities Manager Julius Fowler is well equipped to handle the many challenges of his dual role. "The doctors and staff at Kenwood Animal Hospital are truly exceptional people," he says. "They deeply care about the well-being of all animals - not just the ones we serve. They go above and beyond when it comes to the welfare of a pet."

At home Julius has a Chihuahua named Jerome and a cat named Thunder. 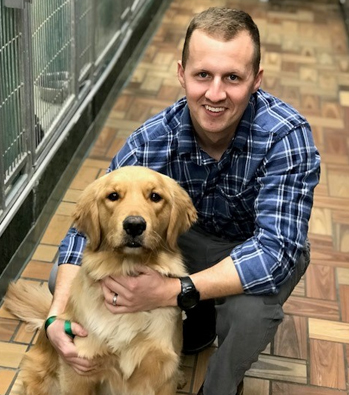 Patrick Dougherty joined Kenwood Animal Hospital as Business Manager in January of 2018. You may recognize him, as he is Dr. Katy Dougherty's middle son. With a background in business and a passion for process improvement, Patrick's role in joining the Kenwood team is to continuously seek ways that enhance the quality of care that we provide your pet and add value to the lives of pets AND pet owners.

Patrick graduated from Lehigh University with a Bachelor’s degree in Political Science and  holds an MBA from American University’s Kogod School of Business in Washington, DC. As time permits Patrick enjoys exploring Maryland’s vast natural resources with his wife and their Golden Retriever, Bear and watching Washington DC's sports teams.